2020 Kicks Off With Some Glam Weather

The start to 2020 was a cracker with some glass out conditions through January.
There were some good numbers of golden trevally spotted, with lure and fly anglers enjoying the golden action. 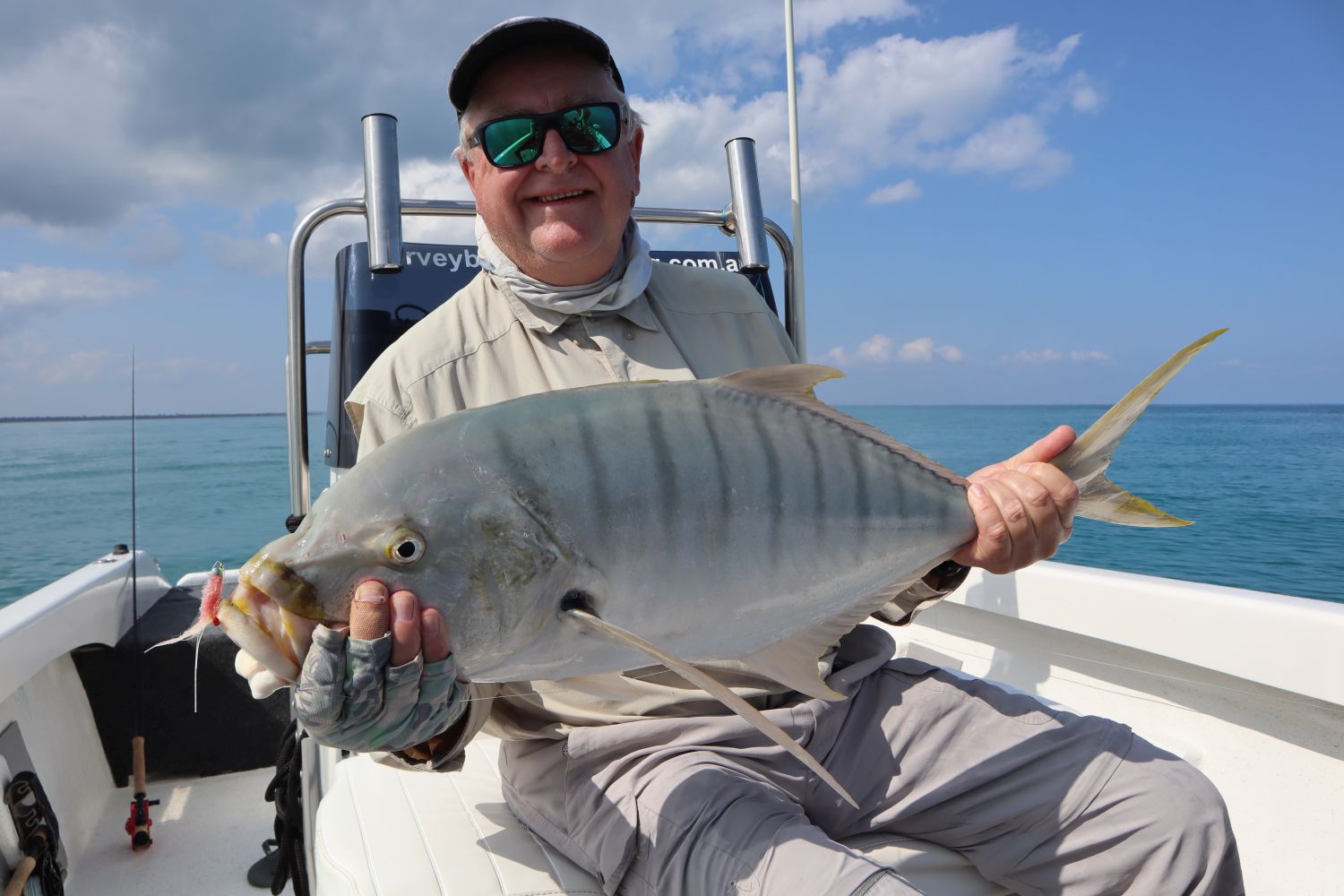 John Burgess with his first golden caught on fly

The golden trevally were targeted using a range of techniques with soft plastics, micro jigs and fly all getting some great results.
Big fish to well over the meter mark were caught along with some huge cobia. 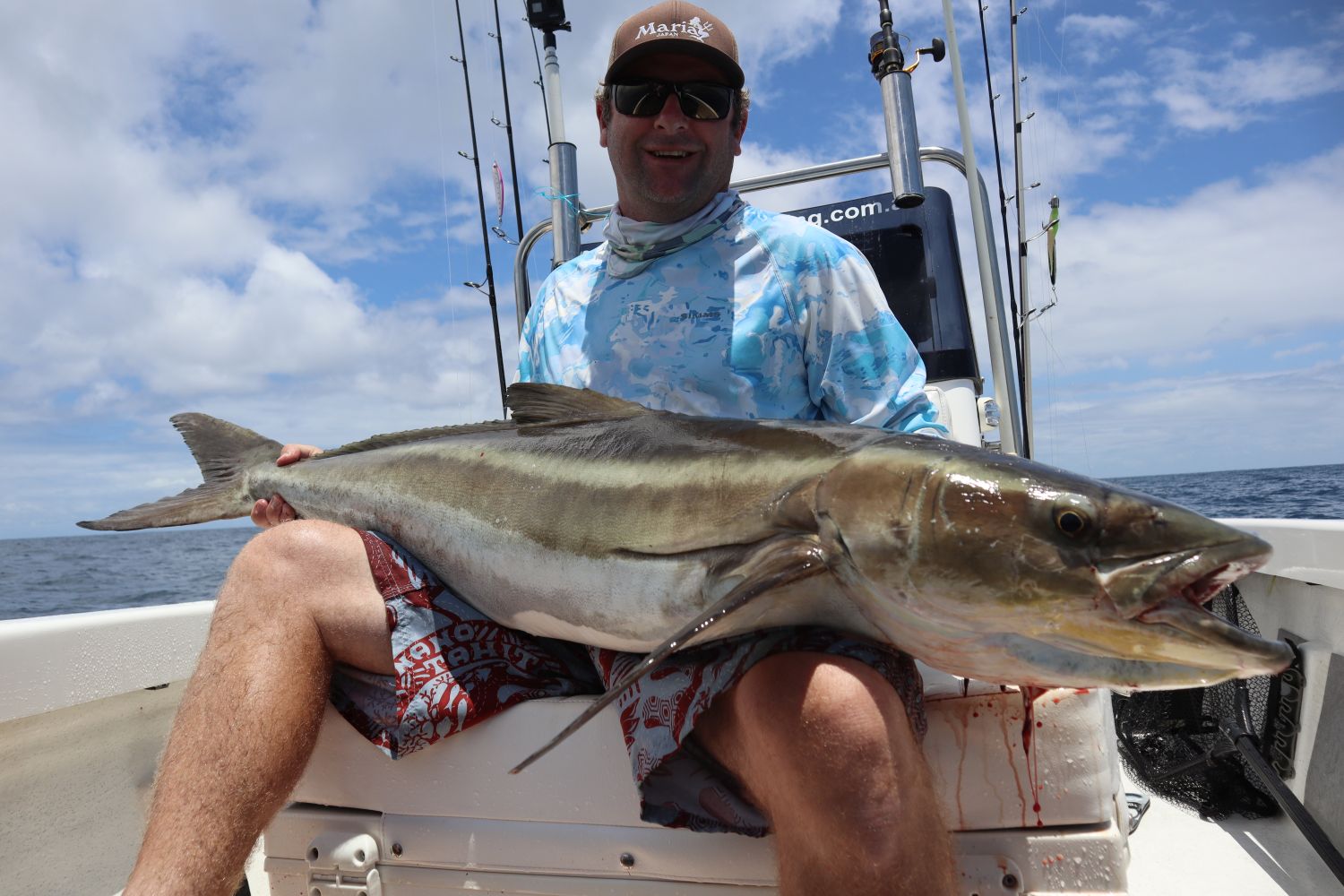 Matt Smith with a big cobia

On the surface queenfish, longtail tuna and mac tuna were present during January.  Pesky sharks created some problems at times which can be heart breaking for anglers. We have developed a few techniques over the years to help land our catches when sharks are a problem…but some days you just have to move on. Most of the tuna responded well to 5 inch jerkshads with the Zman StreakZ always a winner. 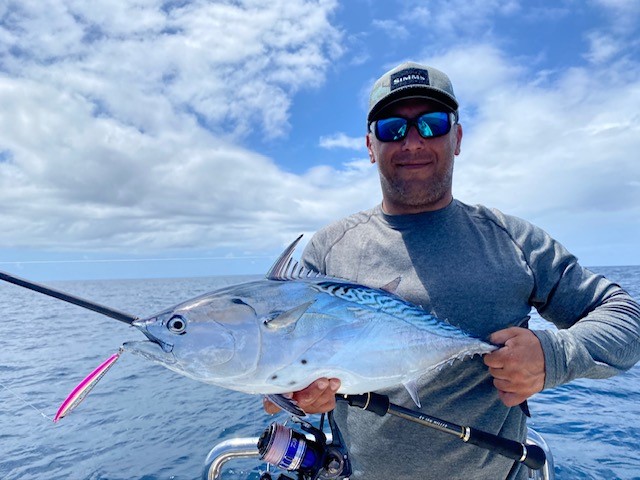 Spiro with a mac tuna caught on a stick bait 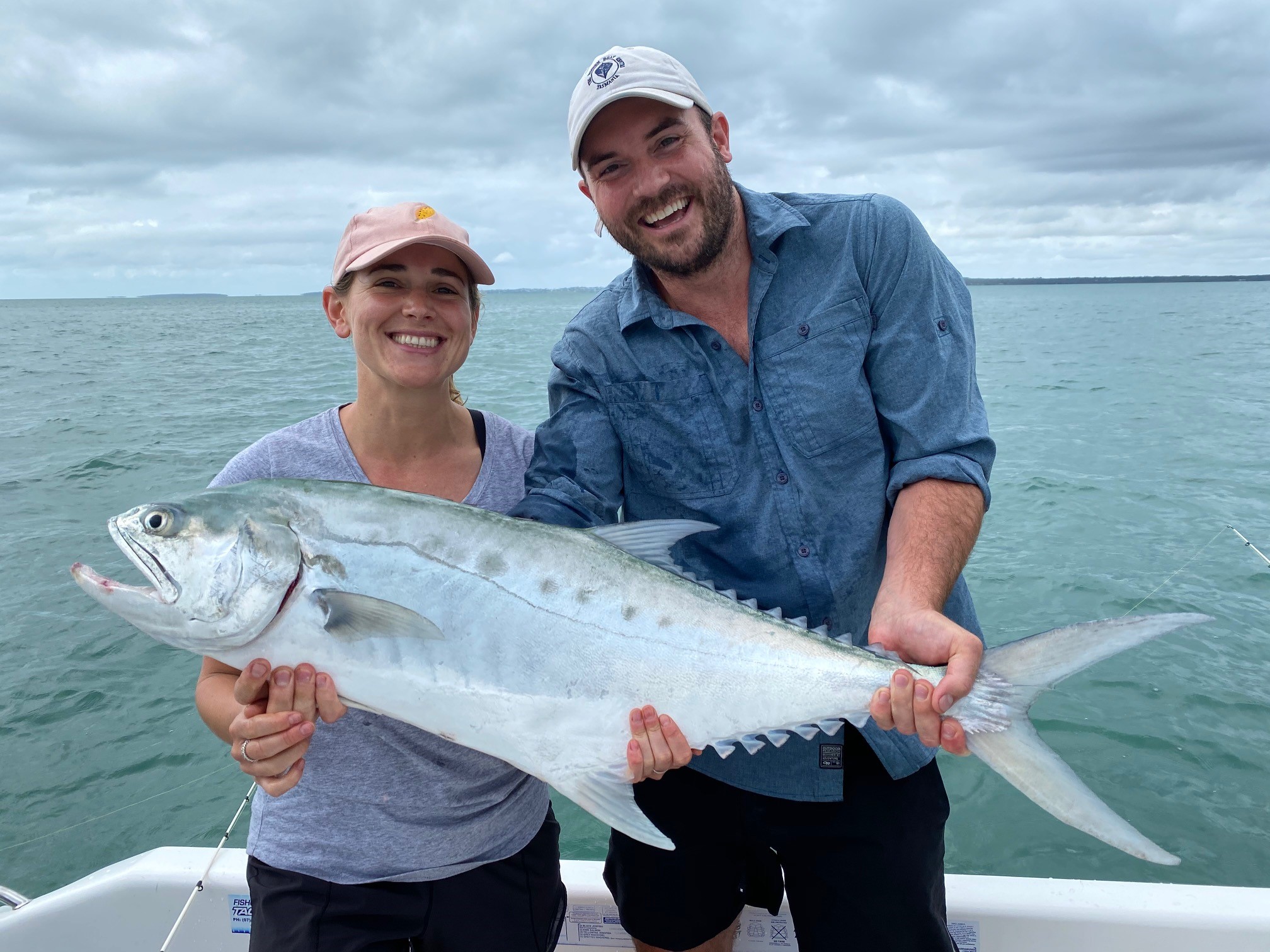 Happy days a beautiful queenfish to kick things off

Spotted mackerel continued their run and provided guests with a tasty feed. The way the spotties ball up the bait is very visual and is often hard to drive away from. Fly and lure anglers enjoyed the thrill of watching the spotties crunch the lure boat side. Bludger trevally, golden trevally and queenfish were also present around the spotty mackerel schools. 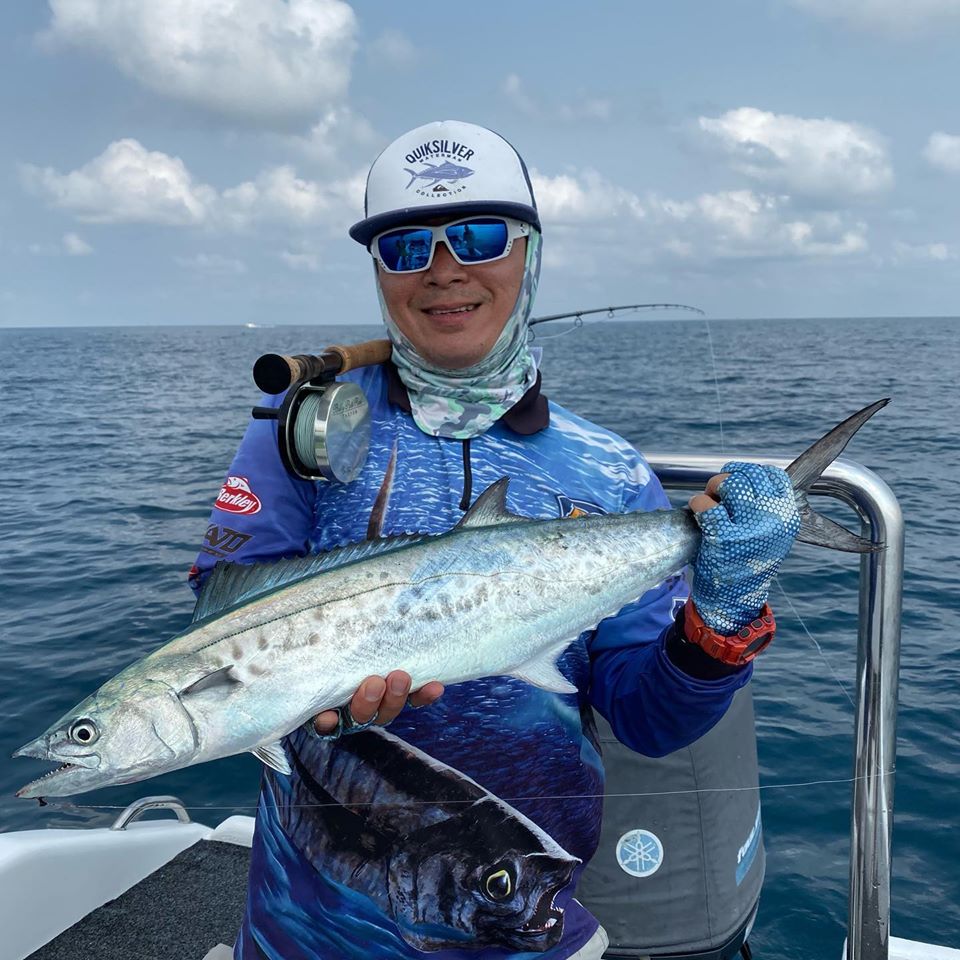 Kym with a spotty on fly.

On the reefs a few scarlets, cod, coral trout and sweetlip were on offer taking soft plastics and jigs. Working the reefs down the straits on days when the northerlies were blowing produced some good fishing. 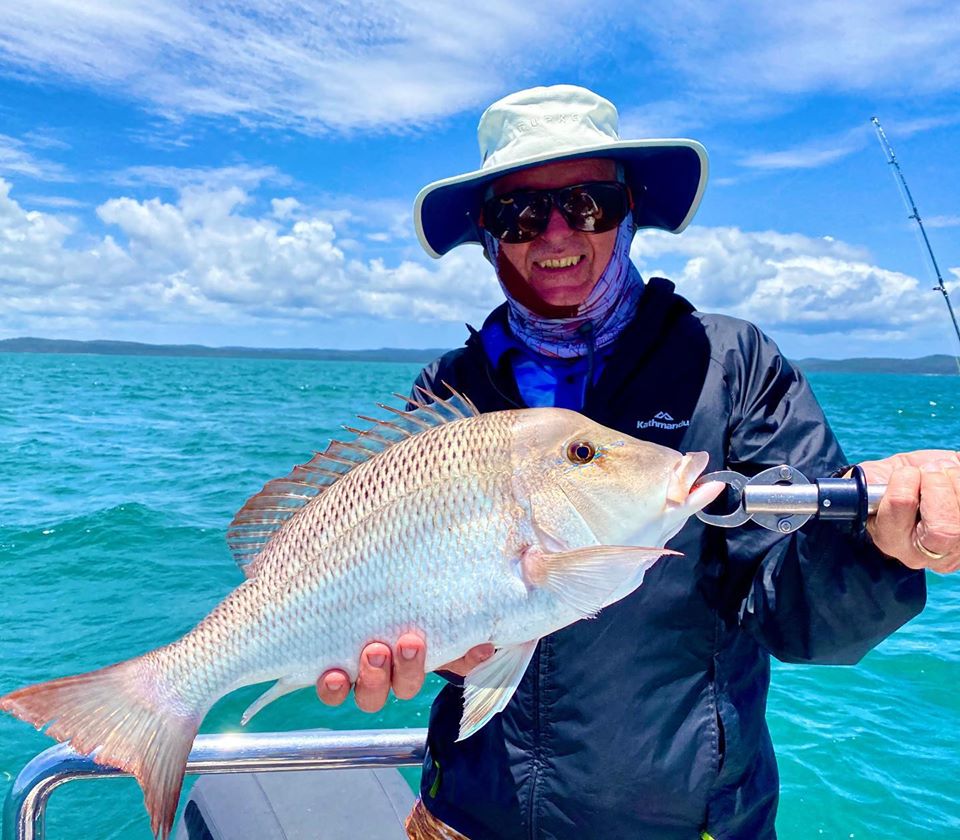 On the flats golden trevally, grey bastards and queenfish were fairly active. We had beautiful  clean water in January as the summer had been fairly dry…until recently! The clear water gave us a rare chance to fish a few flats slightly deeper than usual and opened up some sight fishing opportunities. This resulted in some magic fly fishing, particularly on big golden trevally. 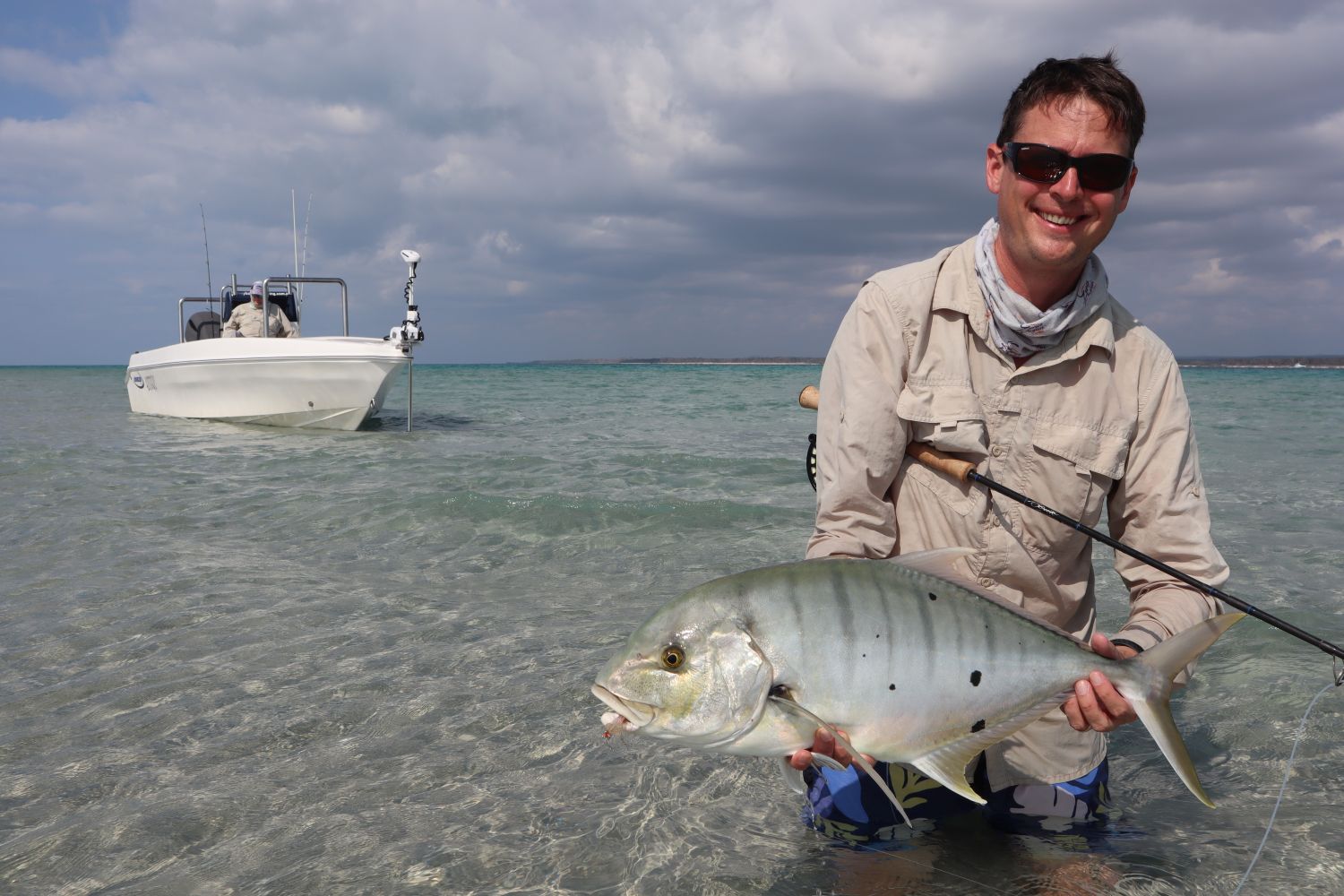 Clear water flats and golden trevally…does it get any better?!

It’s that time of year!  Now that the first cyclone has passed down the coast, it generally marks the start of the longtail season.  Along with bigger longtails, we will see migration schools of queenfish, broad bar mackerel and mac tuna. Golden trevally will also be around  and after the recent rains it should be a cracker of a season. Make sure you book your day out with us soon as spots are filing fast.
Email fishing@herveybaysportfishing.com.au for rates and dates. 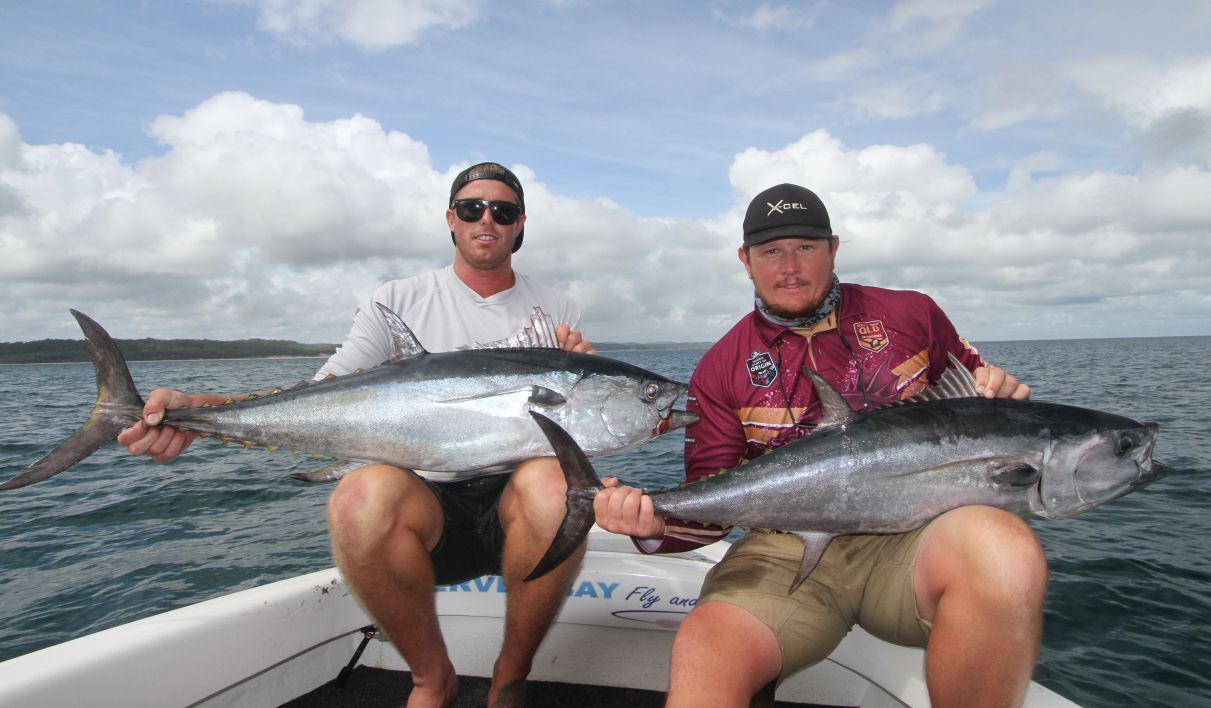 Catch Of The Month 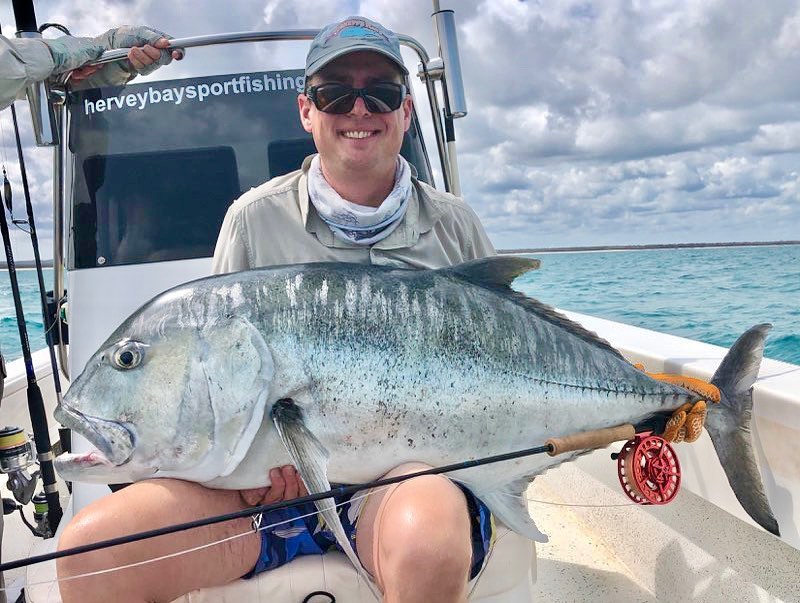 Chris Burgess takes out catch of the month in style.

Chris Burgess takes out catch of the month in style….this 30 kg plus GT was a trophy capture on a 9 wt fly rod. 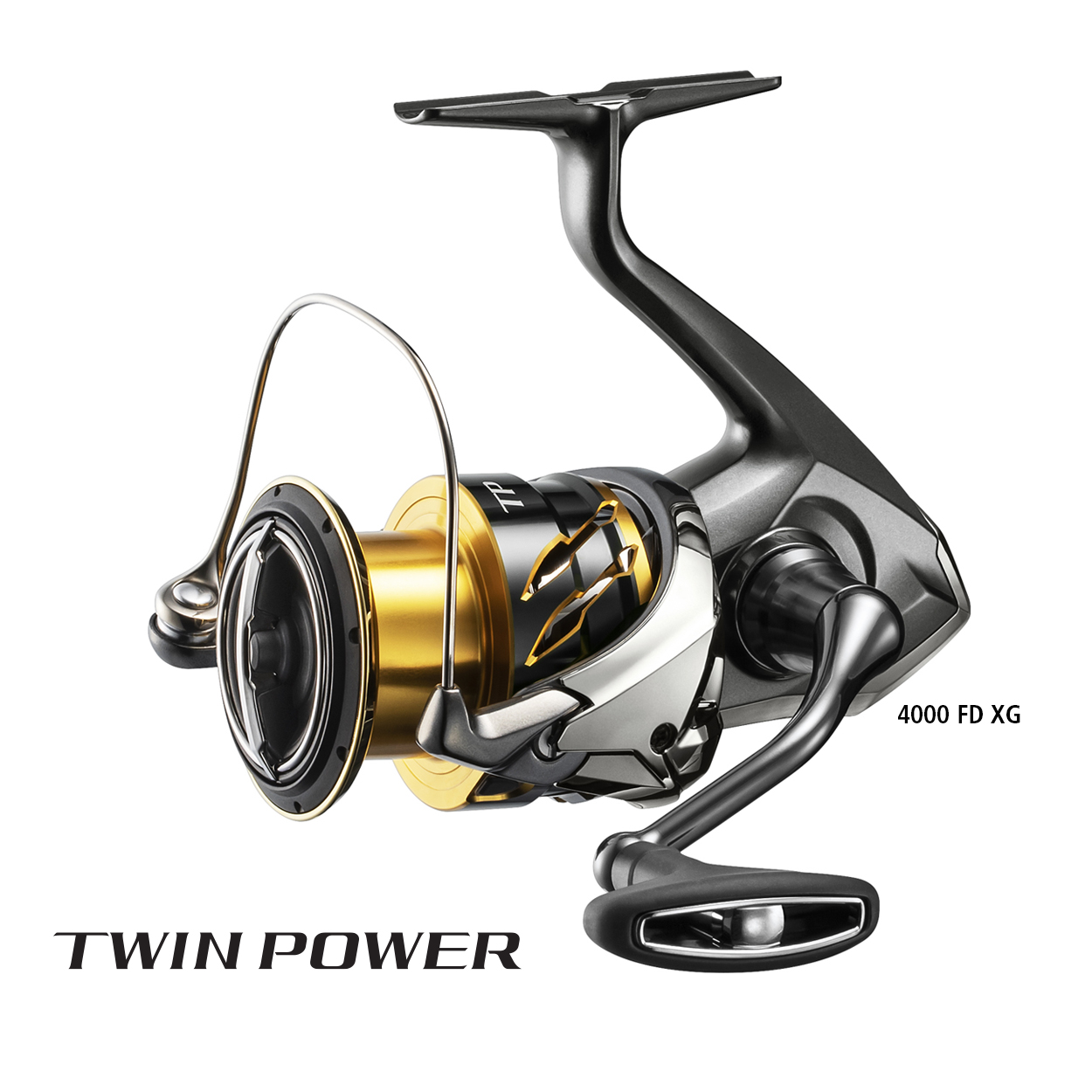 The Shimano Twin Power has a proud 30 years of history since its birth. For 2020, the newly released model is equipped with a metal rotor that integrates the Coresolid philosophy of quality and solidness. This has been pursued for many years and engineered to suppress distortion and twisting of the reel body underload. When paired with the metal Hagane Body, the rigidity and durability of the frame has been improved significantly. In addition, the stiff metal rotor creates a stable winding feel that is comparable to a Stella – the ultimate in smooth reeling. To improve casting performance, the new Long Stroke Spool design has been incorporated. The Twin Power series has continued to evolve into a tough and dependable reel that fisherman can use with confidence in any conditions.
See the Shimano range here https://www.shimanofish.com.au/

There is few new Rods in the sage line up.

Sage’s new MAVERICK has been designed to maximise these quick-shot opportunities with a powerful tip section that drives the casting load down to more robust lower sections, making it easier to fire these quick efficient casts and helping the angler make the most of their finite opportunities. With a true saltwater specific backbone and design, the MAVERICK is ready for any salty challenge thrown its way.

Sage’s new Payload
Featuring a fast action for casting large flies and very powerful tip to help pick up heavy lines off the water, the PAYLOAD is tuned for the extreme. These powerful mid sections then transition to a more forgiving butt that allows for a slower and more relaxed casting stroke that reduces fatigue. This softer butt section also allows for more leverage while fighting fish, making it easier to gain ground on hard fighting species. The slightly shorter lengths offer a more effortless cast through a shorter lever and is better for landing fish out of a boat over a traditional 9’0” rod. 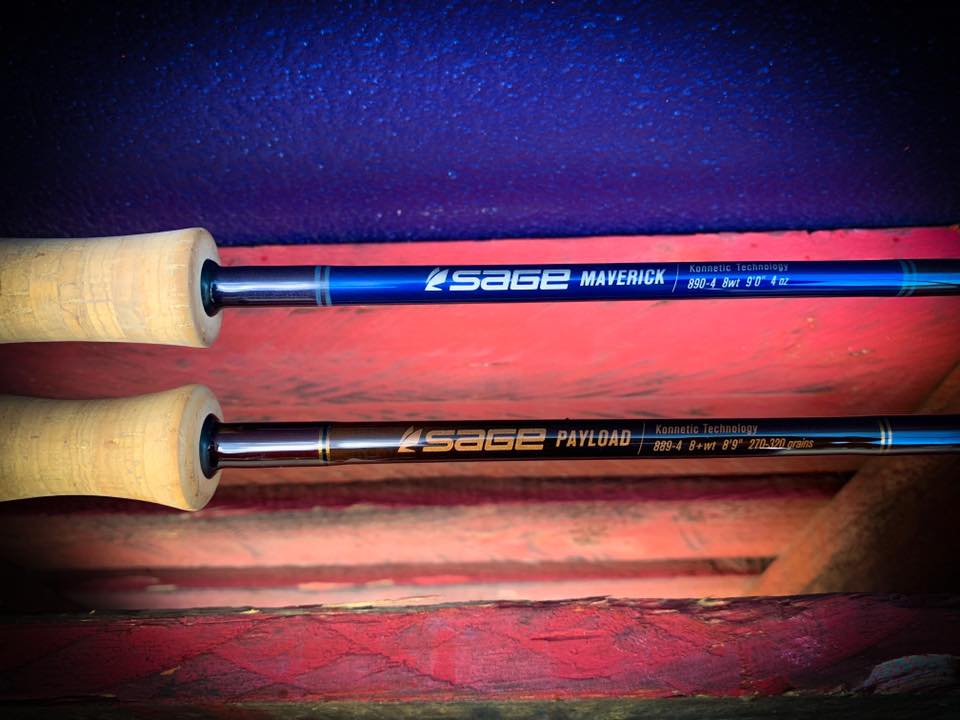 These new rods are available through Fisho’s Tackle World Hervey Bay the boys have an ever growing range of fly tackle, give them a call if you are not local and have a chat or pop in when you are in town.  http://www.fishostackleworld.com.au

We are hosting another group again in 2020 at the Villages Christmas Island.

The Villages Lodge is widely recognised as the premier bonefishing Lodge on Christmas Island. The villages is the only Lodge on the Island that offers one guide for every angler for your entire stay at no extra charge. This will guarantee that you won’t have any down time on the flats and will definitely have more opportunities to cast to and catch more fish. 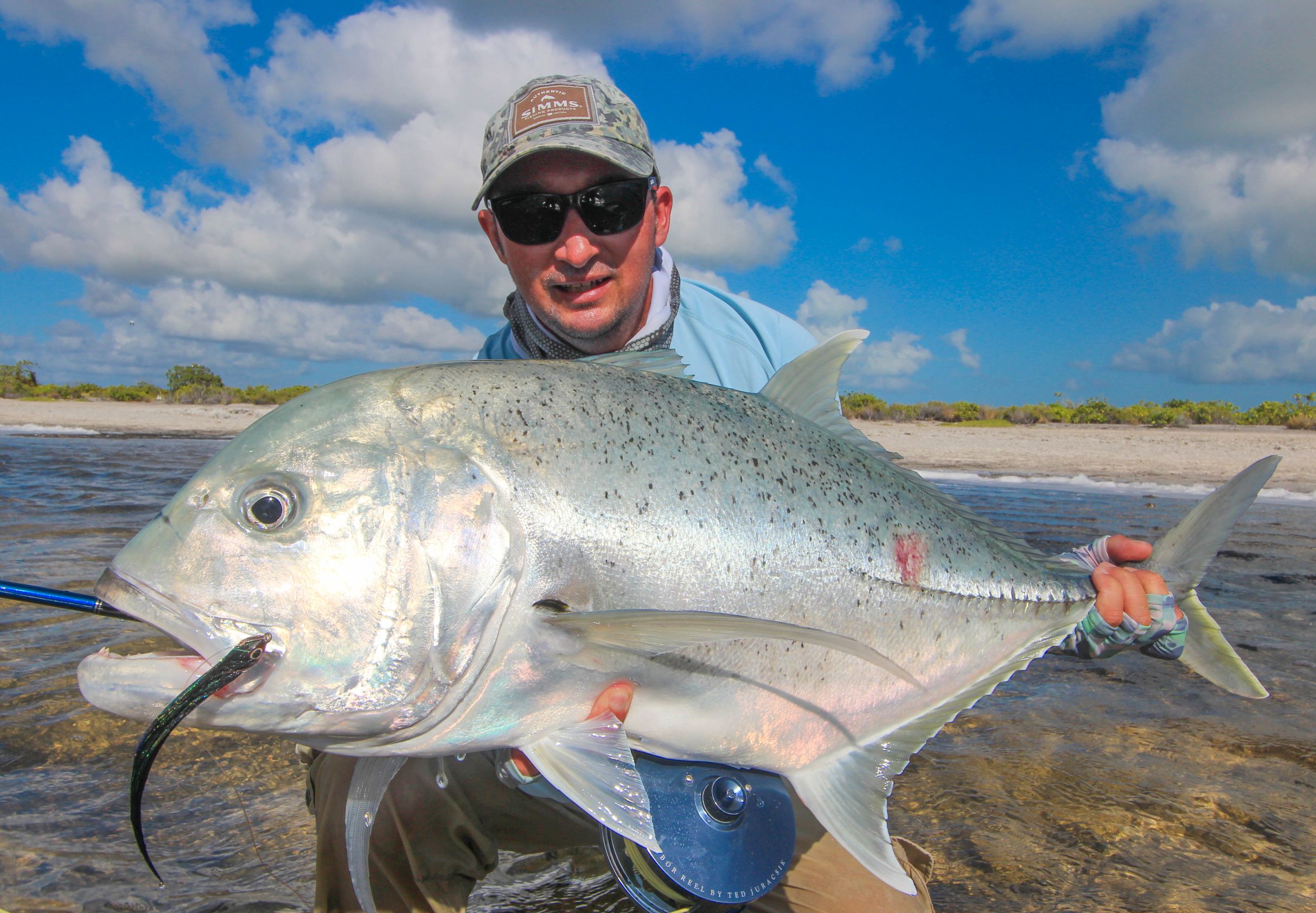 There is more to Christmas Island than just bonefish. GT’s, bluefin trevally, trigger fish, milk fish, lady fish, yellowfin tuna, sailfish and more can all be targeted in and around the lagoon. 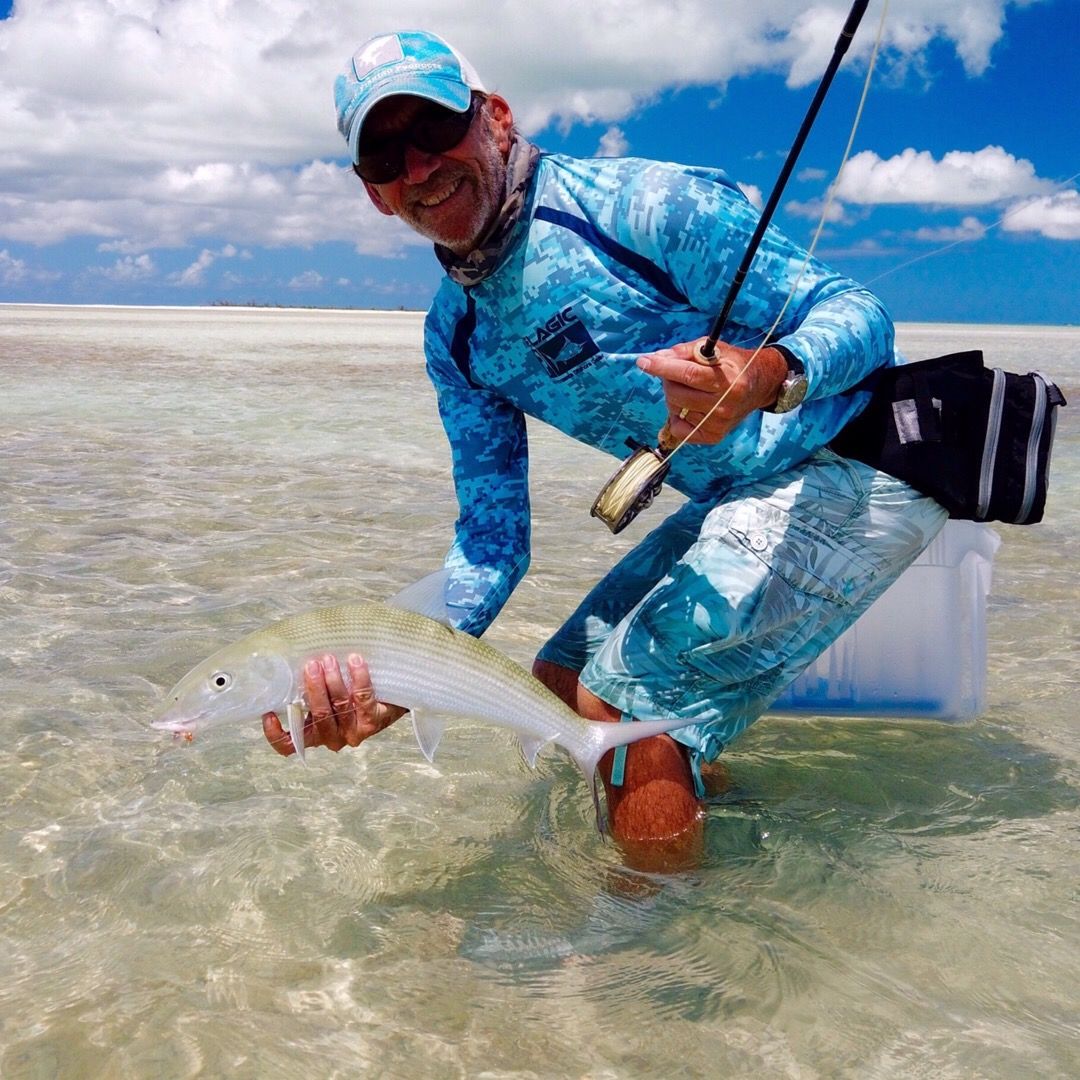 If you are interested in joining our group in 2020 please email us for any further information or to book your spot. fishing@herveybaysportfishing.com.au

For more information about the Villages and Christmas Island visit https://in2fly.com.au/ 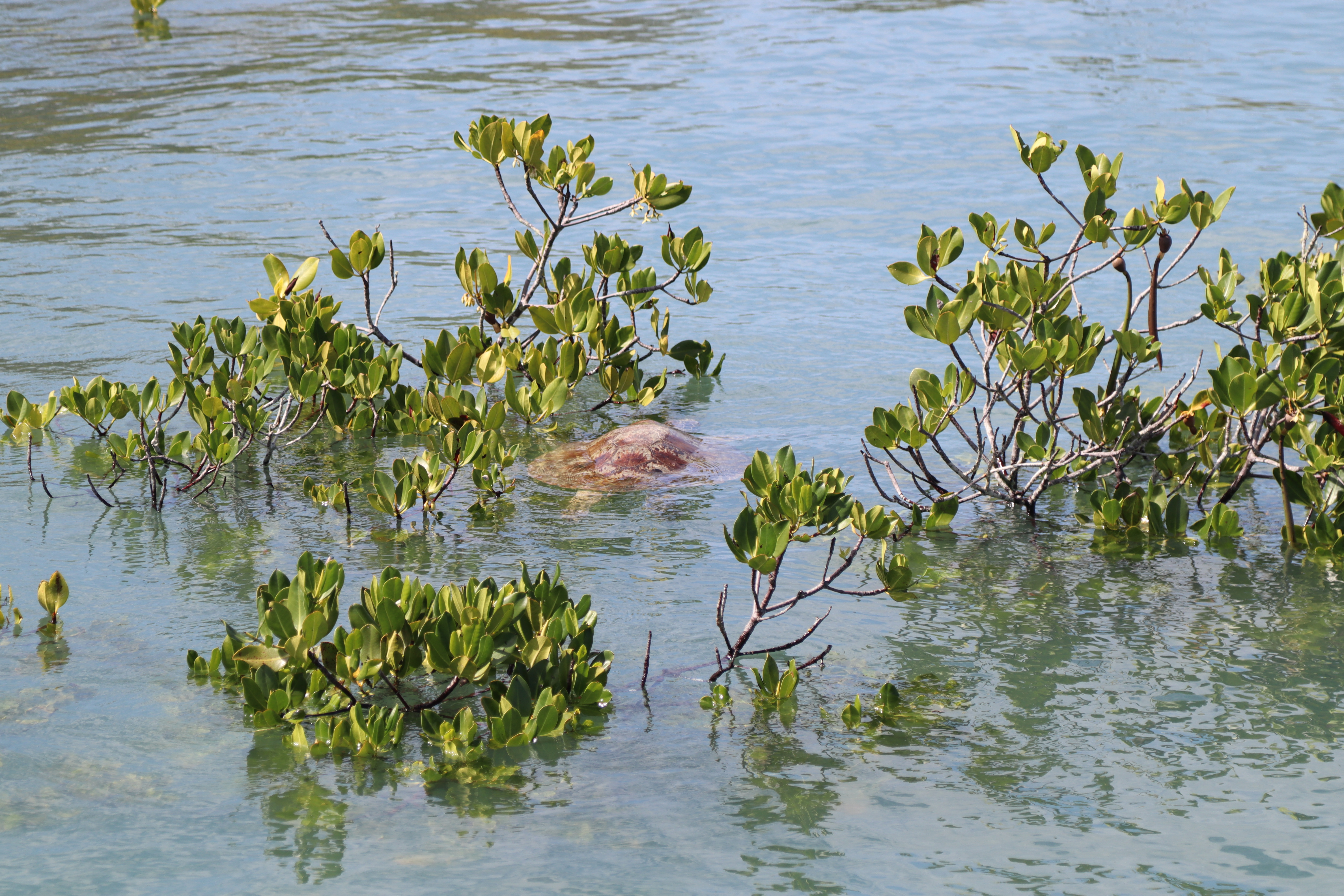 We see plenty of turtles daily but this guy was not shy and seemed to be feeding on crab or some other type of food source from around the mangrove leaves. 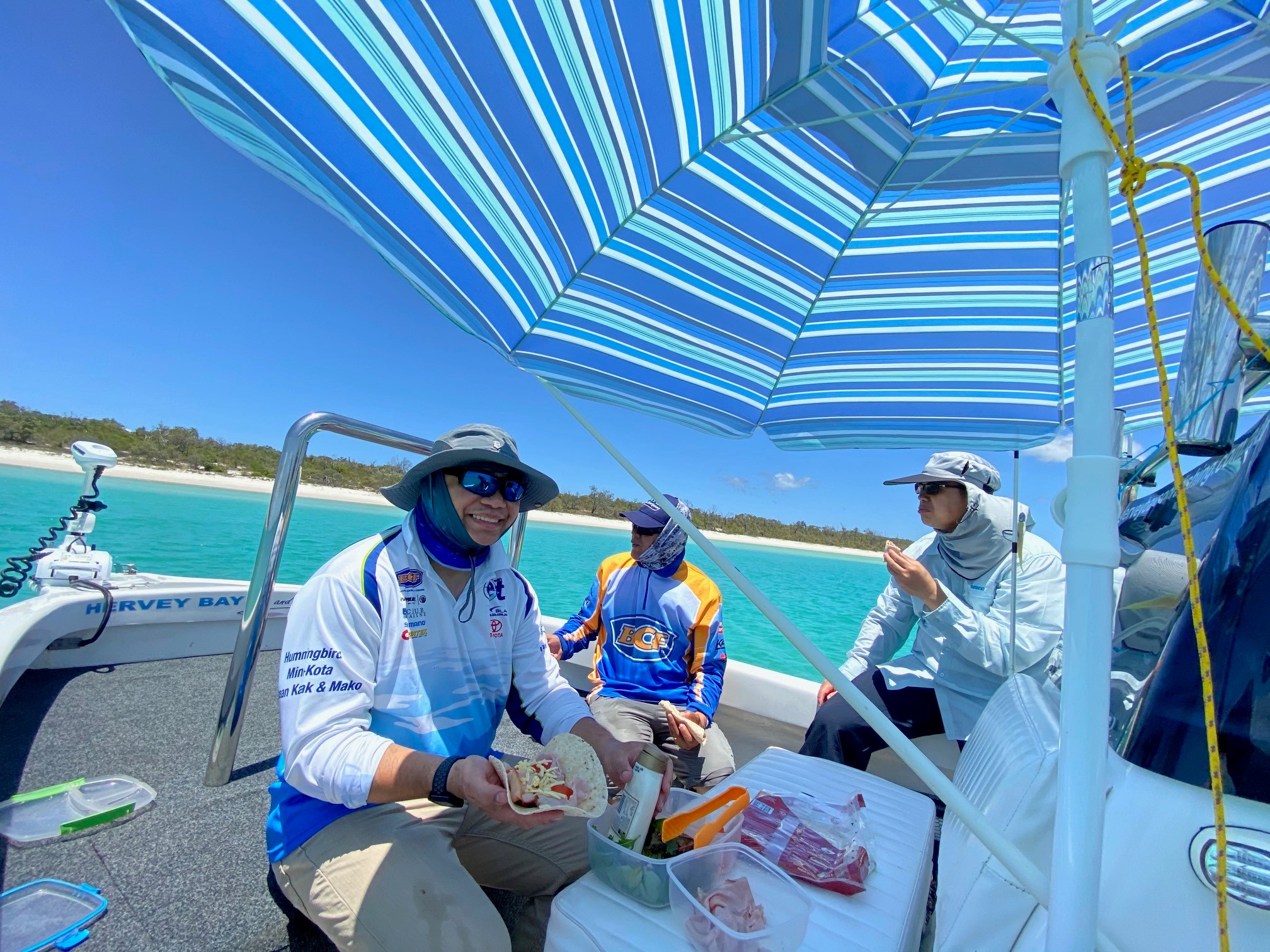 Q: What happens to a frog’s car when it breaks down?
A: It gets toad away.

Q: What did the duck say when he bought lipstick?
A: “Put it on my bill.”

Q: Can February March?
A: No, but April May.

At the time of writing we have received some much needed rain.
The rain has been widespread which is great news for the farmers.  We all know a drought on the land is a drought on the sea, so we should see some great fishing once the weather settles down.  Hervey Bay missed the bigger falls but we have still received some nice totals.
Lenthall’s dam is at capacity and just flowing over with many other catchments doing well out of the rain. If you are worried that recent rains may effect the fishing…don’t be!  The bay responds well to the fresh and we are operating as per usual and out daily. 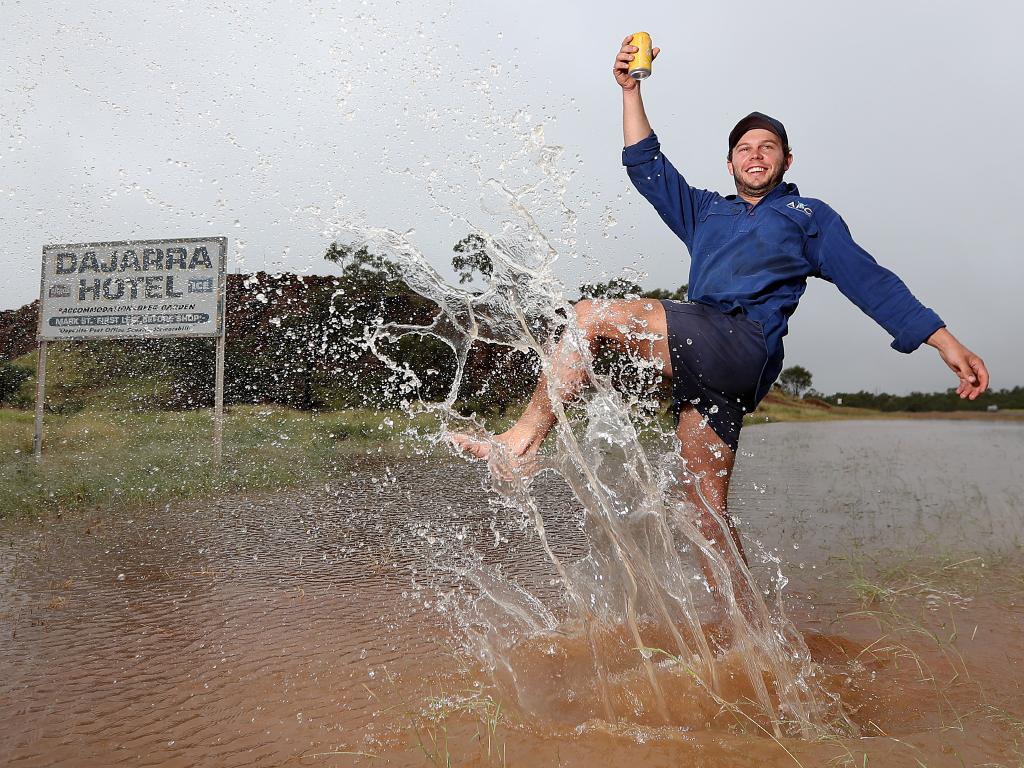 In March 2019, Todd Moen with the support of Tourism Australia filmed the diverse fly fishing terrain along the east and west coast of Australia. The journey included Fraser Island and the Whitsundays in the East and Exmouth and Mackerel Islands in the West. This is just a short preview of what is to come. The proper film trailer will be coming mid March. See it soon online at http://www.Catchmagazine.net

Thanks for reading our newsletter!  See below for pics from our recent charters.

Dinner for the boys

John with a golden on fly

Matt with a scarlet

Spiro with a cod

Spiro with a golden

The fish we catch and sights we see!

If you were thinking of chasing Tuna on fly, I couldn’t recommend Hervey Bay and Andrew Chorley more highly. And if you get bored chasing large numbers of Longtail and Mackerel Tuna, Andrew knows all the reefs that will produce Golden Trevally, Brassy Trevally, Tuna, and various Mackerels with a fast sinking fly line.

Hervey Bay Fly and Sport Fishing Charter without a doubt has been one of the best charters I have been on within Australia. Hervey Bay, with its abundant waters providing a variety of fish all year round in its self makes an amazing fishing location. Andrew Chorley is an experienced angler and Fisher Guide who goes out of his way to ensure everyone on board is well looked after & landing those fish!

The whole experience fishing with Andrew was fantastic, the place, the boat, the company and of course the fishing. I have never fished with a guide who worked so hard to give the client what he wanted (I needed a holiday to get over my holiday) or who was so easy to get along with. A thoroughly enjoyable experience, I can’t wait to get back.

Come and enjoy a great day on the water being professionally guided around our beautiful waters of Hervey Bay. Being a born and bred local and living in Hervey Bay his whole life, let Andrew show you some of the best fishing, wildlife and scenery that Hervey Bay and the Fraser Coast has to offer.